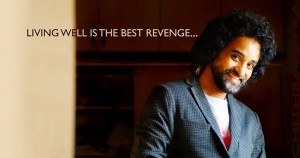 ‘Chithramitra’, hails from Mumbai, Maharashtra. He nurtured dreams of becoming an artist since his childhood. His father, a business man, wanted him to run the family-owned restaurant, and so he was never encouraged to learn or pursue art professionally. He had to hide his sketches from his dad who refused to indulge in his son’s fantasies. He sketched in the bill books of his restaurant until his work caught the eye of a customer from a leading publication called Mid-day Mumbai. From there on, this self groomed artist started his career as a freelance illustrator.

Chithramitra believes that ‘medium does not define the art, but it is the product that relates to the viewer.’

He works with various mediums but charcoal, oil, acrylics, enamel, pen and ink are his favorites. Realistic, surrealistic and graphic are his forte. He loves to create super-realistic paintings on Indian mythology.